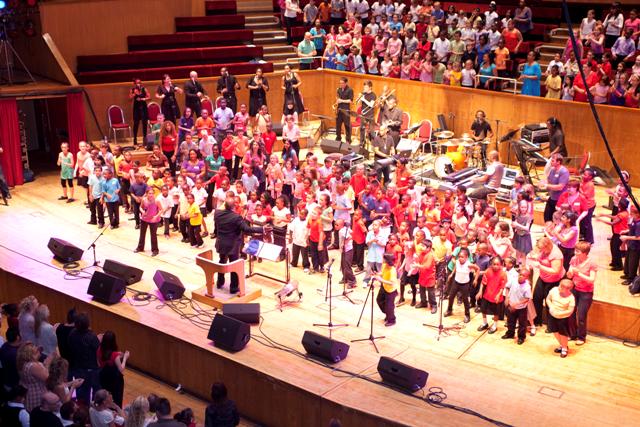 Now that we are getting into the spring season, and if IDMC’s 18th anniversary schedule wasn’t enough for John to be getting on with, John and some of the IDMC crew will be planning and preparing for its spin-off organisation “We Sing U Sing” to deliver gospel choir workshops to schools in and around the south London area. This years sees a special emphasis on the Olympics as London prepares for its big year, John and the team will be preparing the children to be the best they can be for this massive musical gala evening. The project will see 10 schools and after groups get involved with this event which is now in it 5th year. The project Starts just after Easter and will run for 12 weeks ending in a massive concert at the Fairfield Halls, Croydon in the first week in July The project will see a 500 piece choir and a 10 piece band, lead by IDMC musical director Andre Fisher. The date for this event will be published shortly. For more information contact us or visit the We Sing U Sing websit  www.wesingusing.org.uk 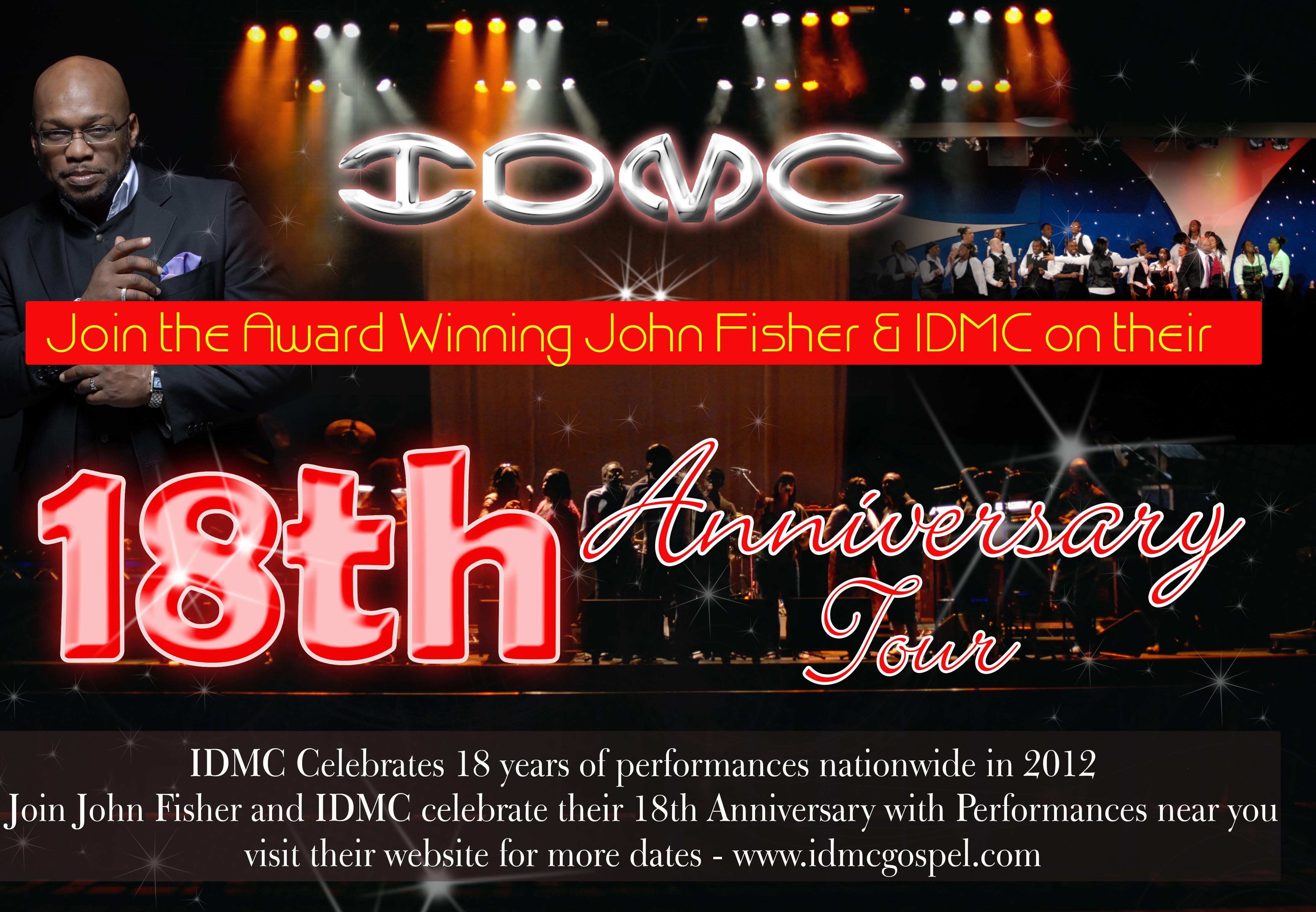 February 26th 2012 saw IDMC mark it’s 18th Anniversary, and now John is preparing to take the group out on the road, around the country for a series of concerts, workshops and live praise session in churches, festivals and concert halls throughout the UK and Europe With a new line up of singers who have been together for just over 18 months, they have worked hard to build the IDMC sound that John has worked to develop for the past 18 years. With a full calendar ahead for the Spring and Summer, and more dates coming on-line every week, John & IDMC plan to be in a town, city, concert hall, festival or church near you, some time in 2012.. John is always looking for singers to join the choir, you only have to be able to sing confidently, be a practising Christian and be able to commit to the choir, the rest we play by ear..lol If you want to book IDMC this year to come to your area for a workshop / concert, don’t hesitate. There is still space in the diary. Let us bring the vibrancy and the inspiration of a full “PROPER” Gospel choir to your area and experience the heavenly sounds. LOOK OUT FOR US… Dates will be published soon.! 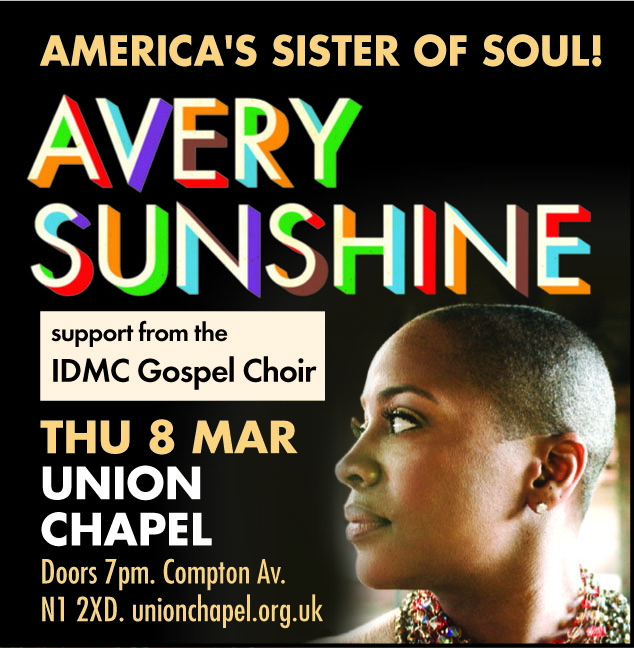 Thursday 8th March saw IDMC begin it’s 18th Anniversary campaign, by opening for the fantastic U.S. Soulful gospel artist Avery Sunshine, at the Union Chapel, Islington, London. A lot of preparation went into IDMC delivering a memorable performance to start its year with a big bang. Playing to a very lively and warm audience, the choir opened with an accapella re-arrangement by John of the Andre Crouch Classic, “No HATRED IN CHRIST”, which instantly set the mood of the choirs set,”QUALITY VOCALS”. The choir then launched into a fitting set of songs all with a soulful tone, from “A Friend” solo by the great Nathan Lewis, into “Lord I lift your name on High” with the classic Jackson’s groove, through Power ballad “Cry” beautifully sung by long time member Rhoda Morson, and even introducing brand new songs “Love lifted Me ” &  ” Don’t lose your Song”. All together the set was we received and received acclaim from Miss Sunshine too. Miss Avery Sunshine’s set was a master class of how to sing, then how to sing properly. This Atlanta native, gave the audience an evening of coolness, and soulfulness that was just great.. Singing songs from her last album and a few new ones, it was a musical treat, which was enhanced even more when Avery invited IDMC back on stage to join her in a few more songs. A totally good night of music.. 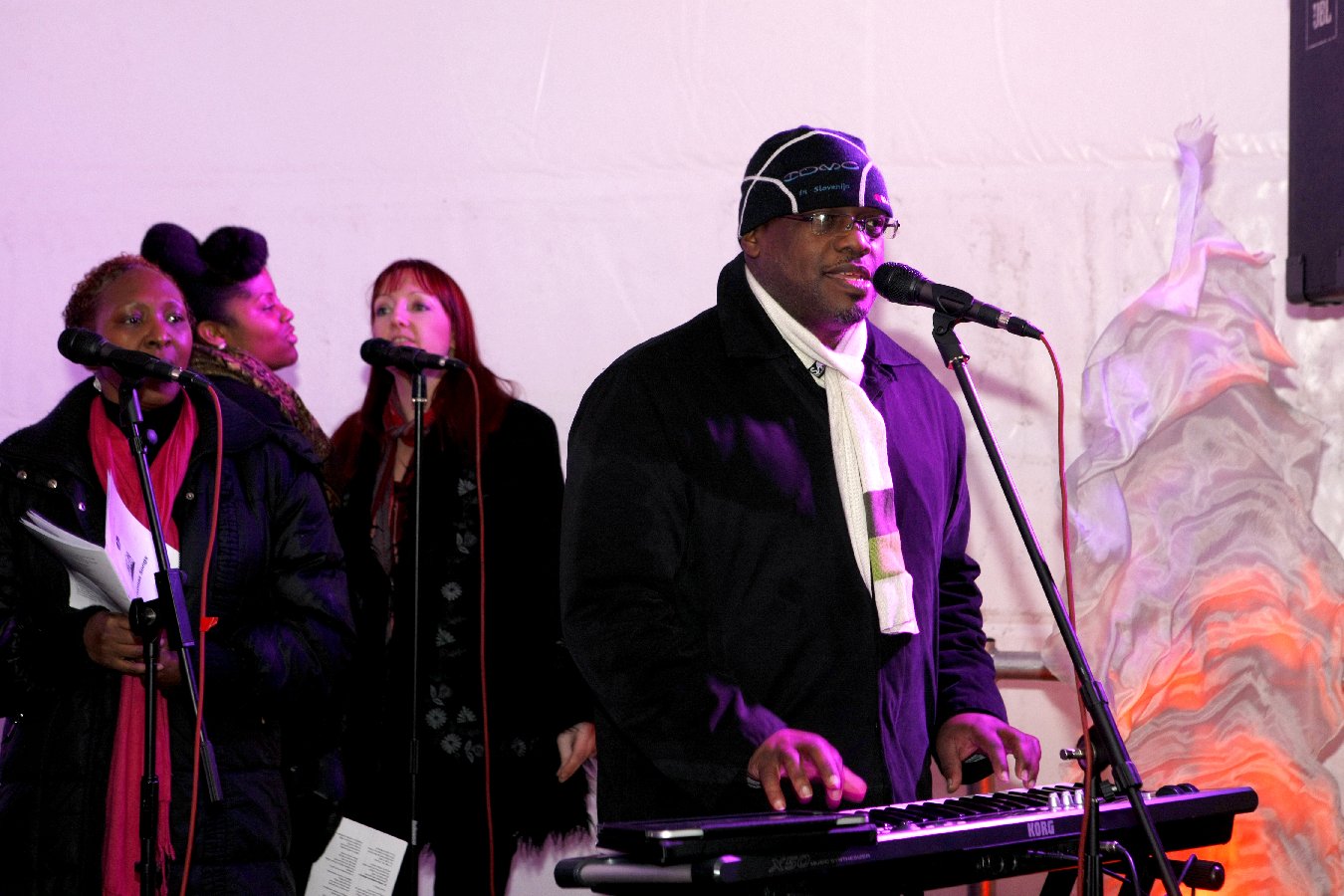 It was such a cold and rainy evening, which threatened to keep the crowds away, but instead they came out in their numbers to enjoy the entertainment provided by the Motcomb street association The audience gathered were treated to a local Jazz band and a military brass band in the earlier part of the evening, as well as the Christmas lights being switched on by well known celebrity Christopher Biggins With the cold and rain coming in, it looked like IDMC would be singing to the shop fronts, but as they announced the choir our friends and fans came out from where they were sheltering from the rain with their brollies in hand, and braved the cold for a 30 minute set in the cold. It was a lovely time, with John and the crew going through seasonal hits, gospel classics as well as inspirational songs, that had the crowd singing and dancing in the rain… Loved every minute… 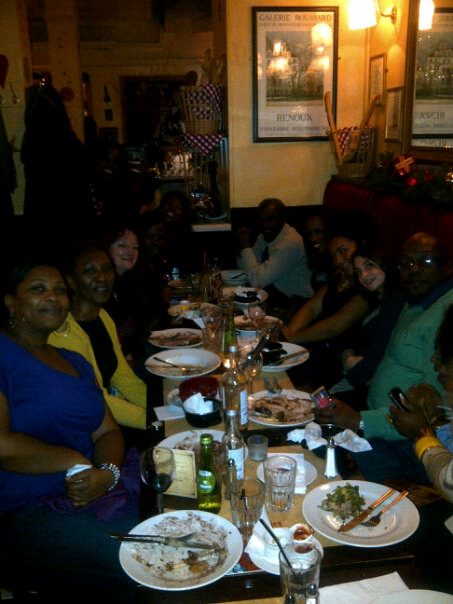 Well it was a cold Tuesday 6th December and IDMC swapped their usual venue of “The Premise studios” for the lush surroundings of “The Cafe Rouge” in the West End. The group were celebrating the end of another year, giving thanks for the many miles we’ve travelled and the hundreds of lives we’ve touched with our gift of music and song. With all the personalities within the choir you can imagine the level of jokes and laughter we share for the whole evening. Sometimes I really worry about the guys around me, and I’m praying for all of you guys…lol!!! Since the “Rebirth project” in March, the team has worked hard to develop and to keep the IDMC standard as high as in previous vocal years, and even to step up to another level. 2012 looks great for the group as we get ready for the choirs 18th anniversary, so please watch this space… HAPPY CHRSTMAS

John and IDMC will be headlining the performances at the annual switching on of the Christmas lights in Motcombe Street Belgravia, just down the road from Knightsbridge. This will be the second year IDMC have supported this event which always promises to be lots of fun. The event starts at 6:00pm with a Jazz band, Household Cavalry and IDMC taking the stage at 7:30pm,  with Celebrity Christopher Biggins switching on the lights, so don’t be late..let’s hope the weather holds. Singing  carols, gospel  and inspirational song, it promises to be a great evening [googlemap width=”427″ height=”300″ link=”http://maps.google.co.uk/maps?q=motcomb+street+london&oe=utf-8&rls=org.mozilla:en-GB:official&client=firefox-a&um=1&ie=UTF-8&hq=&hnear=0x4876053b8ad2384b:0x4f320114a5b53b4f,Motcomb+St,+London&gl=uk&ei=zGnVTqjsLMKN8gPL5c2SAg&sa=X&oi=geocode_result&ct=image&resnum=2&ved=0CDkQ8gEwAQ”]