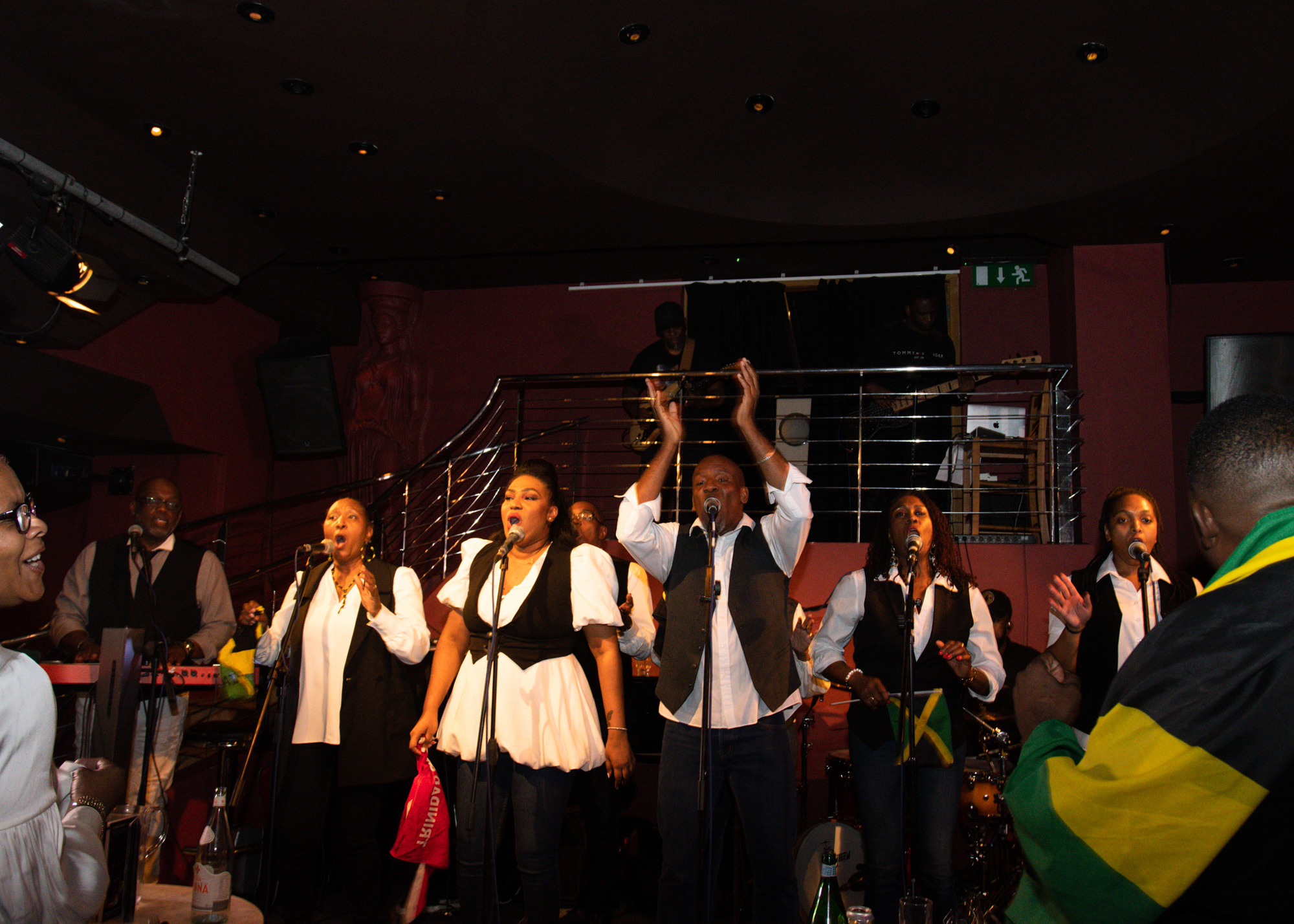 IDMC’s return to venues continued with their second in the series of “CONCERTS ARE BACK’ Friends reunited event, held this time at the Pizza Express, the pleasantry in Chelsea. This very intimate venue saw John, Dayna, Clive and first time drummer for IDMC Nathan share a very small stage with 8 of IDMC’s best on a lovely summers evening. The choir by now was getting back into the stride of performing and giving their audiences the full IDMC experience.

The songs set incorporated celebrating the Jamaican 59 independence celebrations, so a very cultural shown with the choir singing the Jamaican national anthem, Bob Marley classics, as well as reggae songs from IDMC’s own set list, along with great original songs and covers that made the night feel like a massive party from start to finish. A couple of weeks prior to this event, John had help start and directed a new community choir, the Diaspora Jamaican choir, and gave them the opportunity to cut their teeth on the IDMC stage. They were received with love as they delivered a beautiful song really well, and we wish them a great future.

IDMC are Back and are ready to continue to deliver life changing and amazing performances to audiences right across the UK. stay tuned.

The trip to Birmingham for John is always like a trip home, as he spent many years of his life. Going to concerts and church conventions there, so once this gig was confirmed, John along with Teressa, IDMC’s PR representative put the word out to John’s circle who booked their tickets to enjoy another of the choirs series of “friends reunited” concerts.

As we all know that 11th September now is now steeped in sadness due to the tragedy in the USA, but before there was 9/11 USA there was 9/11/63, the year that the first lady of IDMC was born, so this was a gospel birthday party where John was the DJ and the musical backdrop was the unforgettable sound of IDMC Gospel Soul Choir. As with other events, the audience were just so happy to come out to a live event after being locked down for up to 18 months, and to have their favourite style of music on tap made the atmosphere very comfortable for the choir to perform. With a strong vocal team, and band that featured John’s son, original music director, producer and co-arranger Andre on drums, but also Birmingham veteran guitarist Ollie Pinnock on the set with Anaconda bass guitar endorsee Darren Franklin and Wayne Gordon.

The set was contemporary, inspirational, full of soul, funk, reggae and soca, but most of all the message was clear, Jesus is love, there is hope, and you can make it! So it was totally understandable that the audience didn’t want the show to end and once John sang the final song, they left smiling after a good night out..

We know that the Christmas return of the choir to Pizza Express in December is going to be a full on party for all that come along, so get your tickets now.