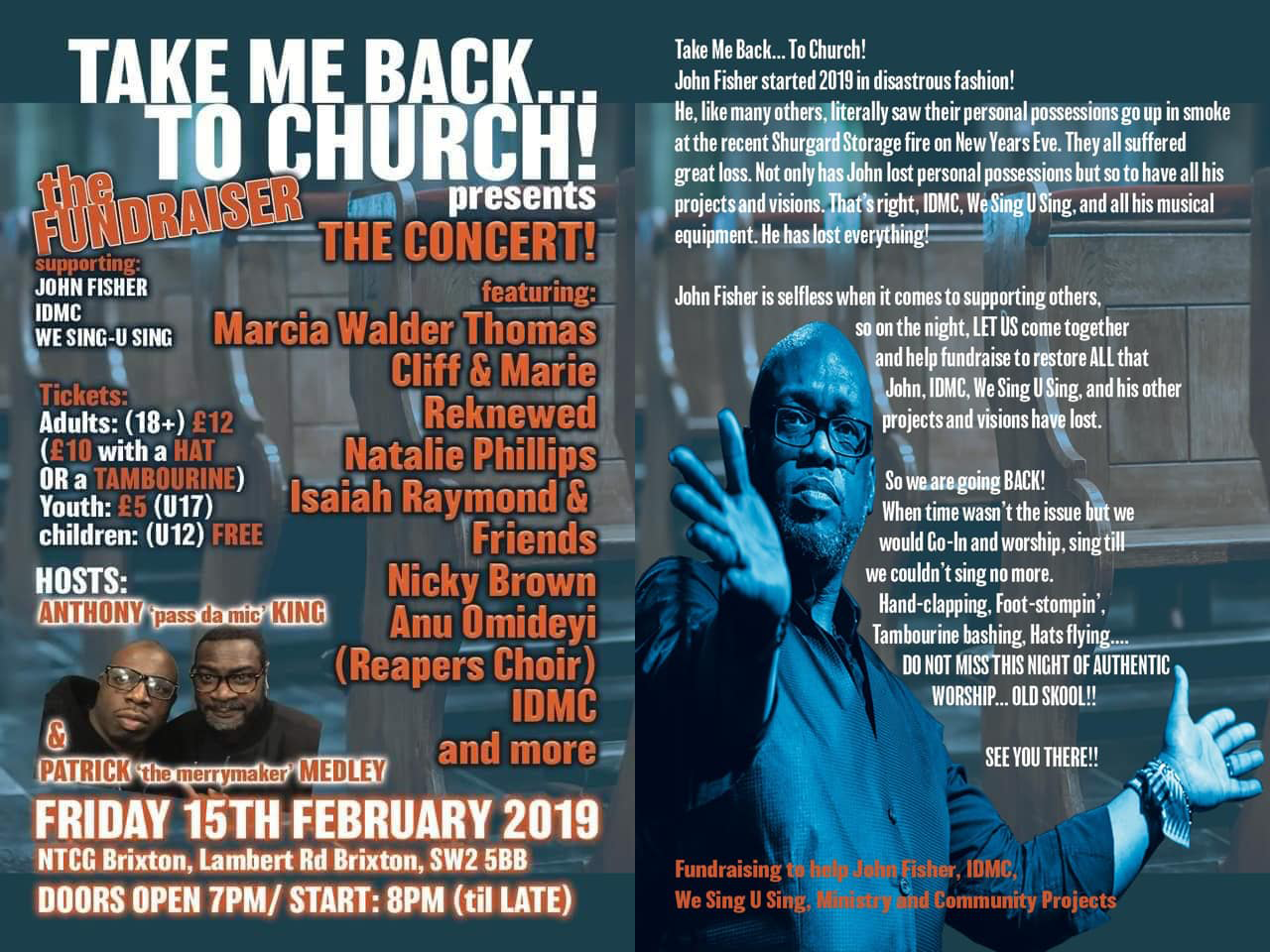 An absolutely HUGE fund raising concert has been organised by comic M.C. and gospel personality Anthony ‘pass the mic’ King and Patrick Medley aka Bishop Shacklefoot on Friday 15th February 2019 in aid of John Fisher and his work with IDMC Gospel Choir and the children’s music and arts initiative, We Sing U Sing. As you would have read in last months news update, John suffered a massive blow at the start of the new year with all his business possessions being destroyed in the Shurgard warehouse fire (read the full story below.) Generously, John’s musical friends, fellow gospel artists and peers have joined together and agreed to put on a fundraising concert titled, “TAKE ME BACK TO CHURCH”, where artists such as Noel Robinson, Isaiah Raymond Dyer, Anu Omideyi, Nicky Brown and many more will come and show their love and support for John and the amazing work he has been doing for over 40 years.

Wednesday 21st February 2018 marked a momentous moment in IDMC history as John Fisher and the team united with friends, well wishers, industry executives, media bigwigs and politicians and spent the evening in the presence of His Excellency Mr Seth George Ramocan the High Commissioner for Jamaica, at the Jamaican High Commission celebrating the official launch of IDMC Gospel Soul Choir’s 9th album release – ‘Hideaway Live’.  Host and compere for the prestigious evening was Anthony King, who brought some cheeky laughs, setting the atmosphere for what proved to be a superb evening.   After the opening prayer from John’s pastor, Bishop Eric Brown of NTCG Brixton Community Church, IDMC delivered an awesome arrangement of the Jamaican National Anthem, followed by a welcome and address from IDMC’s alto section singer – Elaine Grant who composed and delivered her speech in a way that would have been right up there alongside that of Barack Obama!  Elaine introduced his Excellency Seth George Ramocan to give his address, and unsurprisingly he mentioned that Elaine’s address was so powerful, he really didn’t have much else to add!  Additional speeches were provided by IDMC stalwarts Jo Bega, Courtney Hoillett, Sandra Johnson and the lovely Mrs Fisher. IDMC continued to perform more songs from the new album, which were well received by the adoring audience. Good friend to John, Paul Harrison who has been working very closely alongside John and the choir, delivered an address sharing the Adopt a Clinic project from which a percentage of proceeds from sales of the album will go towards.   Also in the house that night was Bishop Shacklefoot who delivered one of his sermons (if you know of Shacklefoot you will be laughing out loud at this point!) in his very own comedic style, which left the audience roaring with laughter throughout.  Another awesome moment came when great friend to John, Pastor Mike White of The Tab Church London, delivered a short encouragement and a call for all ministers to surround John and the Album. They prayed and released IDMC’s 9th album into the atmosphere… Buy your copy of Hideaway Live Donate to the Adopt a Clinic appeal here